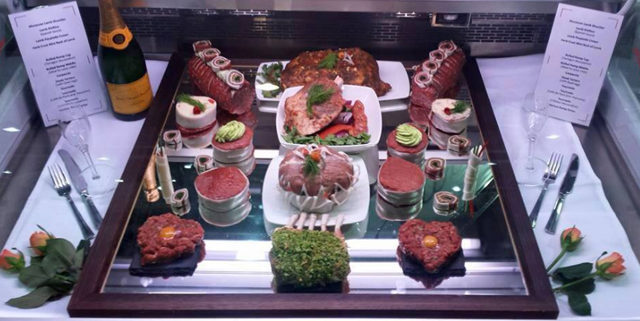 Britain’s passion for dry-aged beef, and the demand by ‘MasterChef’ wannabes for high quality ingredients, has inspired two local master butchers from Leamington Spa to create two new national award winning sirloin steak cuts for fine dining, either in or out of the home.

Award winning butchers Aubrey Allen based in Warwickshire have faced their toughest butchery contest yet: against each other.

Successful competitions are not a strange phenomenon to Aubrey Allen who hold the title of Europe’s best butcher after beating the French on their home turf in January. However, on Wednesday at the National Agricultural Exhibition Centre, Stoneleigh, two finalists in the National Butchery Craftsman competition were both from Aubrey Allen.

Daniel Turley aged 29 was coached by European champ Michael Perkins and came out on top against colleague Nick Clayton-Gale (27) mentored by Martin Crombie (Michael’s team mate in the European Competition).

Russell Allen, Managing Director of Aubrey Allen and grandson of the Coventry founder said “I was really proud of them both and of their coaches for getting them to such a high standard of craftsmanship. It was strange though because we are very much one team but we did have some good natured fun with the two butchers competing against each other. It is a great competition with a fantastic £1000 prize money so I am sure the lads will want to enter again next time!”

Dan said “I was thrilled to win and I am grateful to Aubrey Allen for their commitment to training me to such a high standard and supporting me, and being up against Nick was certainly fierce competition.”

Want to join the discussion?
Feel free to contribute!